skip to main | skip to sidebar

First over the Line

The Mayor's Gala dinner was held the next night, Saturday 30th July. It was a repeat of the previous night except that different sailors were chosen to go on stage and none of them gave a speech. The winners of the prizes were announced. The categories were: best dressed crew, best dressed boat and first over the start line. Sal Darago was FIRST OVER THE LINE! This was a fantastic achievement for our 36ft veteran, especially as she was up against 50ft monohulls and speedy catamarans. We watched them all go past us after the start. Here's Jeremy modelling our prize, a waterproof sailing jacket. We thought this was very generous.

The wifi signal here is a bit slow and intermittent, which is why only one photograph at a time can be blogged. Next stop for us is the much quieter island of Rote.

Posted by Jeremy and Kathy at 01:26 No comments:

Sailors on the Stage

Jeremy was asked to represent the UK and several other sailors of different nationalities were asked to go up on stage. Jeremy thought everyone had been asked to make a short speech of thanks, but this turned out to be incorrect. He had been duped. Here he is centre stage after he had given a very good vote of thanks to all the officials and local government representatives.
Posted by Jeremy and Kathy at 01:16 No comments:

The first dinner was held on Friday 29th July. Happy 30th birthday, Emily. We listened to speeches by the Governor's representative and were entertained by traditional dancers. Indonesian food was served buffet style to 100 or more hungry sailors. Afterwards there was Western music and disco dancing until late.

Posted by Jeremy and Kathy at 01:02 No comments:

This is the new modern side of Kupang. We arrived safely at 3.30am on our fourth night at sea. It was scary coming into the harbour at night especially as the route was lined with lots of brightly lit fishing boats, beyond which we could see nothing.

This is the old Kupang. You might be able to see a man climbing in through his window. It's been a huge culture shock for us getting used to a new language, a new currency and much hot and spicy food. We're learning fast.

Posted by Jeremy and Kathy at 00:36 No comments:

And we are off. We may have been first over the line - who knows, but there were about 60 boats so it was difficult especially with sneaky fast cats.

Posted by Jeremy and Kathy at 21:19 No comments:

We were given lots of useful information about anchorages in the Northern Territory and in Darwin by locals, Carole and Kevin on "Chantilly". Then we met Canadians, Carmen and Robert on "Caminata", who were leaving Gove the same day as us. This photo shows the dust created when the bauxite is loaded by conveyor belt into the hold of ships at the wharf. We were glad we were going the other way - upwind.
The first hazard (apart from ships) was a tidal passage between the mainland and an island. It was a bit rough on the approach but otherwise deep and straight, leading to a calm stretch of sea called Malay Roads. A few miles ahead was another tidal passage between islands with a dog leg turn in it. Both yachts passed through without incident and anchored for the night in a bay close by.

We needed to have the tide with us when we went through the "Hole in the Wall" (pictured) the next morning. Jeremy was keen to go through at night and had no worries about the concealed entrance, the narrow passage, the cliffs on both sides and the fact the tide ran at 9 knots at springs. He bowed to pressure from Carmen, Robert and me. We approached at exactly the right time and had no problems. Our journey continued for two days and nights. We had reasonable winds, a bit light at times, but Sal Darago sailed well with two headsails poled out to either side. Each night the Australian Maritime Patrol aircraft would call us on VHF radio and check our position, home port, last port and destination. We've heard that the Northern Territory has been a target for those who smuggle people, drugs and alcohol.

The next time we saw "Caminata" was in the anchorage in Coral Bay. They had arrived before us but they had motored for 9 hours, so we consider ourselves first for once. Like most of the Northern Territory, you could not go ashore unless you had a permit as the land is managed by the Aboriginal people. There was a resort ashore but we decided not to pay $25 each to land and
$47 each for dinner.

Our next anchorage was meant to be Popham Bay near Cape Don. We entered in thick, choking smoke. There was a bush fire on the hillside. We turned around pretty quickly and anchored in Alcore Bay further west with 5 other yachts. Next morning at 6.00am only two of us were left in the bay. We rounded Cape Don in a fresh to strong breeze and found ourselves making 12knots with the fast flowing tide. By the afternoon there was no wind and we had to motor to the anchorage at Cape Hotham. Our final obstacle was the Vernon Islands where strong tides have to be taken at the right time or you go nowhere. Those that sail in Morecambe Bay are very familiar with this. All went well and by taking a few short cuts across the sandbanks we made it into Fannie Bay, Darwin, 30 minutes after sunset.
Now we're trying to learn as much as we can about sailing in Indonesia having checked in with the Sail Indonesia Rally, the Indonesian Consulate and Australian Customs.
We leave for Kupang on 23 July. We do not expect to be able to access email, write blogs or communicate by mobile phone while we are in Indonesia... so if you don't hear from us, you'll know why.

Posted by Jeremy and Kathy at 23:57 No comments: 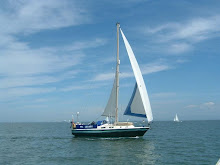 Jeremy and Kathy
A couple of retired teachers travelling the world by sea.